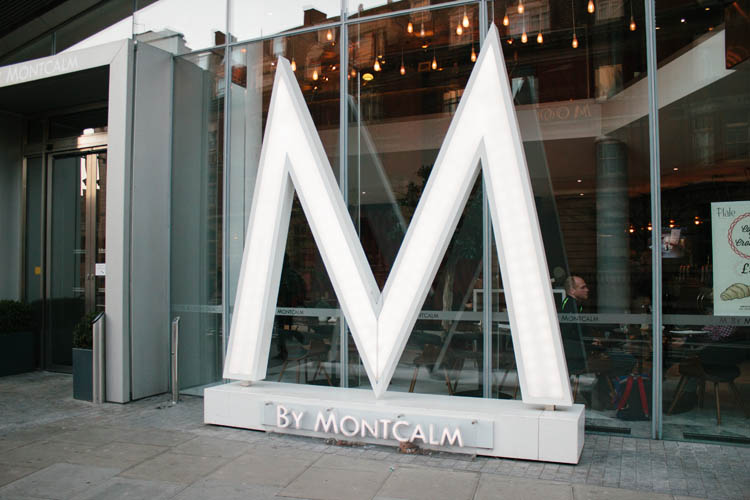 Creating experiential signage for London’s most futuristic luxury hotel yet

M by Montcalm is an ultra modern 5 star luxury hotel situated in Shoreditch, London, the centre of London’s ever expanding Tech City.

Recognised as one of London’s most futuristic-looking and high-tech hotels, M by Montcalm features state-of-the art business facilities, a wellness centre and gym, a Michelin-starred restaurant, a private members club, and a rooftop bar. Both hotel’s public facilities and 269 beautifully designed rooms  are enhanced with intelligent technology throughout.

Launching in early 2015, Montcalm invited JFK to create the hotel’s signage to add the finishing touch. As the hotel was a highly game-changing addition to London’s hotel scene, and located in a highly creative district, M by Montcalm’s management team briefed us to create some fascia signage that really announced that the hotel had landed.

In light of this, we worked closely with M by Montcalm’s agency, Want Marketing, to produce a high impact, experiential fascia sign that really grabs guests attention upon arriving: 6-foot illuminated 3D letter “M”, custom-built exactly in line with Montcalm’s branding requirements. This was augmented by a series of smaller surrounding built-up lettered signs. The result is an innovative, techy and creative sign for an innovative, techy and creative luxury hotel.