Cast Bronze Plaques for The Ned 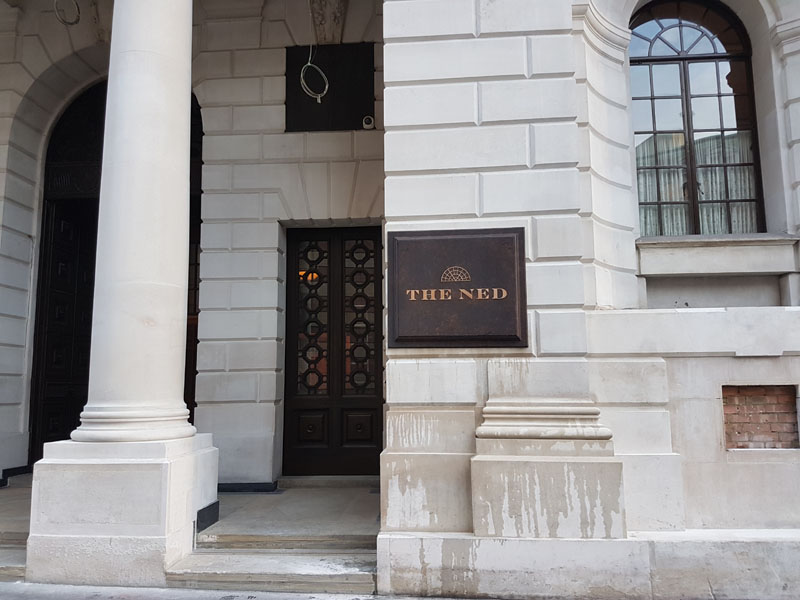 The Ned is a luxury hotel, members club and collection of restaurants in the City of London set in the former Midland Bank headquarters, a grade one listed building designed in the 1920s by the great British architect Sir Edwin ‘Ned’ Lutyens .

Launched in 2018 by Soho House and Sydell Group, and refurbished for an incredible £200 million, The Ned lovingly restores the building to its original grandeur. It now once more exudes the style and sophistication of the roaring 1920 and 30s and is currently regarded as one of the city’s most spectacular heritage hotels.

A vast undertaking of 320,000 square feet, it includes 250 beautifully modernised guest suites, seven restaurants, two bars, two swimming pools (one on the roof), a gym, and a Cowshed spa.

There’s also a members club set in the basement in the original bank vault, which featured in Goldfinger. The original 20-tonne door remains along with 3,000 original silver safety deposit boxes.

Nearing the end of the hotel refurbishment’s completion, in August 2018 The Ned’s management team contacted us to create some signage.

The Ned briefed us to create some premium fascia signage that matched such an exquisite and faithful refurbishment. As this was a significant investment for a historical landmark, catering to a highly discerning, details-focussed audience, the signage needed to be authentic. It needed to match the hotel’s 1930’s art deco feel, and to carry the substantial facade of the building.

In light of this, we worked closely with Soho House’s design team to create signage that perfectly fitted the bill. Our team created a series of bespoke art deco inspired signs. To do this, we used traditional sign making methods and top quality materials. The fascia’s welcome signage is a series of extra large super thick bronze castings with polished lettering. The bronze castings were specially patinated to give it that old weathered feel, complementing the historical building. We also created a bespoke art deco decorative projecting sign with gold leaf detailing.

It was an absolute pleasure to add the finishing touches to this landmark hotel.