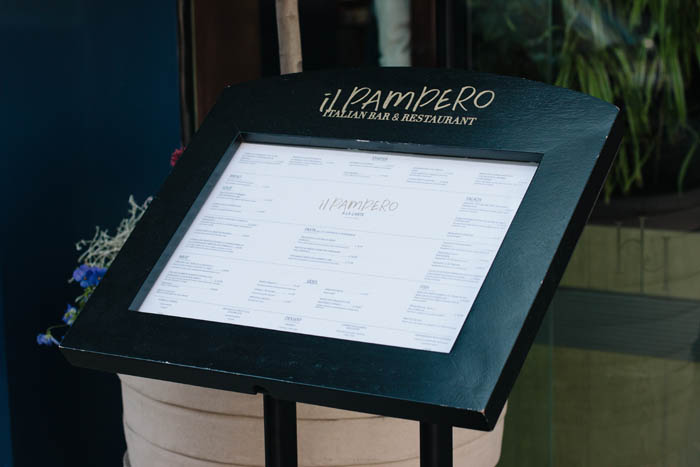 Il Pampero is an Italian bar and restaurant located in Belgravia, within The Hari Hotel, Knightsbridge, London. The restaurant serves freshly made traditional Italian dishes. The venue’s interior was designed by acclaimed designer, Tara Bernerd, and the kitchen is led by former Novikov and Locanda Locatelli chef Claudio Covino. Harper’s Bazaar described it as “bringinh a dash of la dolce vitato to the smart London borough of Belgravia”.

The Hari is a boutique luxury hotel recognised for its passion for culture. It is furnished with art by leading international artists, including fashion photographer Mario Testino and conceptual artist, Tracey Emin, The Hari was created in summer 2016. Previously known as the Belgraves, the hotel was bought by Harilela Hotels, who rebranded and relaunched it.

Upon launch, the Il Pampero’s management team came to JFK signs to create Il Pampero’s fascia signage. As Il Pampero was launching in tandem with The Hari, a brand new luxury hotel brand, the restaurant’s signage needed to look exceptional in order to give a premium welcome to guests.

In light of this, we worked closely with them, as well as their design partners, Hong-Kong-based brand consultancy, Mark and Chantal, to create its fascia signage. As such, we created a premium sign with laser-cut white bevelled on a reverse-cut gold board.